L. P. Hartley’s novel, The Go-Between, begins with the words ‘The past is a foreign country: they do things differently there.’

This is also the theme for the play Foreigners from Home, the story of the Kidd family struggling through the hardships of the 1930s Great Depression in country Australia.

The story has a more recent context by being told through the eyes of a now aged family member who, in 1990 while recalling her childhood, is able to look at past events from a different perspective.

Foreigners from Home was written by Chris Dickins, who now lives in Foster.

Foreigners from Home is ‘an unashamedly Australian play in its idiom, setting, characters and plot. In its depiction of the past, it reminds us that history can indeed repeat itself and, though advances in technology may have altered some parts of our lives, the essential human qualities, fears and strengths remain’.

The play was first performed in 1991 and has received many accolades from audiences young and old. It has even been translated into German for a successful season in Frankfurt.

FAMDA staged Foreigners from Home under the direction of its playwright, Chris Dickins, at Foster War Memorial Arts Centre from 27 September – 6 October 2013. 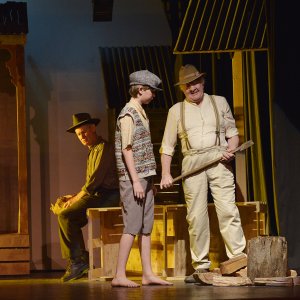 Gippsland Associated Theatre Awards – Winner
Most Outstanding Male Supporting Actor in a Drama or Comedy – Bruce Grainger (this achievement was even more remarkable when you consider that he stepped into the role less than two weeks before the play was due to hit the stage)
Michelle Linahan Judge’s Award – for the ‘beautiful creation of a river using fabric, lighting and sound’